Helping you adapt to change through knowledge.

Retail Automation Is Not a Cure-All—People Are Still Important 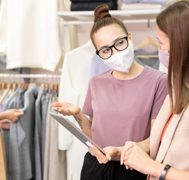 Much of the anxiety surrounding retail automation is that it would cut jobs for real humans. And while the debate is still ongoing as to whether automation eliminates jobs or simply shifts and disrupts them, MIT economist Daron Acemoglu argues that this technology doesn’t necessarily boost productivity.

Acemoglu labels technology like self-checkout kiosks at grocery stores or automated customer service over the phone as “so-so technology.” He cites Tesla’s decision to fully automate its California assembly plant as a good example. After delays and malfunctions, Tesla’s CEO, Elon Musk, admitted it was a mistake.

There are other industries, like healthcare, where services simply cannot be automated.

So, as sophisticated as some of our technology has become, for the time being there are still many instances where a human touch is still needed.

What Tech Can and Can’t Replace

While technology has certainly evolved since 2016, it is interesting to see how the pandemic has bore out these projections.

The concept of unpredictable physical work is especially important with how real people became “essential” during lockdowns. While self-checkouts eliminate certain duties at grocery stores, for example, stores still need people to ensure brands have product in stock, are priced right, and have correct labelling.

With regards to warehousing and distribution work, Amazon Canada announced last fall that it was hiring 15,000 new staff with wage boosts on offer for front-line workers. This is especially noteworthy since Amazon is well-known for its push towards automation technology like drone delivery.

We also cannot underestimate the expertise of retail workers.

Stores can use AI to generate planogram resets, but it can’t compensate for things that humans see and react to in situ like a display being properly placed. Workers also provide important interaction for customers on the floor like directing them to products or advising on substitutes for brands that are out of stock.

Please fill out the form below to book a consultation